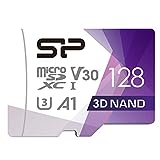 The memory card has the latest speed standards. First, it has an A1 specification. Every micro SD card has a different speed class. Speed Class depends on the capacity of the memory card. Application Performance Class ensures the performance that is required to control various applications using a micro SD card. Application Performance Class A1 not only helps in storing videos, music, maps, dictionary, and pictures but also solves the problem of slow updating and editing of data.

The memory card is capable of meeting the A1 standards and has the capacity to deliver a random read of 1500 IOPS and random write of 500 IOPS. It is the best memory card for storing games, music, photos, videos, and various applications. In addition, the memory card is also dustproof and waterproof. It can withstand extremely low and high temperatures also. Its operating temperature is 0 to 70 degrees Celsius and operation voltage is 2.7V to 3.6V. It is durable and can bear up to 10000 insertions. The memory card comes with a 5-year warranty by the manufacturer and has an automatic Error Correction Code function.

Therefore, this memory card is the best microSDcard which is both reliable as well as durable. Besides this, the memory card also has high compatibility with other devices like tablets, Tablet PC, DSLR, Action Camera, HD Camcorder, drones and smartphones.

The memory card also has a Nintendo Switch. 3D NAND means the piling of memory chips on each other’s top. The basic aim of 3D NAND Technology is to make the device faster and efficient. This technology also enables the device to hold more and more information